Django/Celery – From Development to Production

Subscribe to my newsletter and never miss my upcoming articles

When building web applications with Python, you will most likely find yourself using Celery to handle tasks outside the request-response cycle. In my case, I was building a website which had a "quote of the day" section. I needed a way to automatically change the quote everyday at midnight. It wasn't very hard for me to get up and running with Celery during development, but I had a bit of a tough time to get it to work correctly in production. I decided to document this for future reference, in the hopes that this will not only be helpful to me, but to anyone else out there who may be trying to figure out how to use Celery in production.

So, without further ado, let's dive in. I created a simple Django project called celery_project to accompany this post. The source code is available at github.com/engineervix/django-celery-sample.

If you would like to take a peek at the initial project structure, you can clone the repo and checkout commit 975b982

I will not go into further details of setting up the project, as this is well covered in the README.md file. It is, however, worth mentioning that,

At this point, you will observe that we have already configured the project to work with Celery. There's a celery_app.py file in the config module, and config/__init__.py has some celery configuration. In addition, we have a bunch of Celery settings in the config/settings/base.py file, including a Celery beat entry, which hitherto hasn't yet been defined anywhere in the project. The last line of config/settings/development.py has one Celery setting: CELERY_TASK_EAGER_PROPAGATES = True.

I created a Django app called daily_quote, which provides the main functionality of our simple Django project. The directory structure of the app is as follows:

Okay, so this is a simple app that mimicks fetching a quote from some API. I know there are several quote APIs out there (most of them are not completely free), but because I had specific quote requirements and didn't have the money to pay for a subscription, I quickly put together a bunch of quotes in a JSON file (a temporary measure until I settle for a good quote API such as They Said So®), and defined a celery task to grab one quote everyday at midnght and save it to the database. This quote is displayed on the homepage. Once again, you can take a peek at the code either on Github (see #997bc88 or on your machine:

At this point, we are ready to run our app, including the celery task task_fetch_daily_quote. Once again, see the README.md file for more details. I have observed that many tutorials online tend to suggest opening two (or three) terminal windows – one for your ./manage.py runserver, the other for celery and the other for celery beat. I find this rather too cumbersome, so I use npm scripts in my package.json file, powered by concurrently, which, as the name suggests, allows one to run multiple commands concurrently. So, I only run one command

which does so many things concurrently, in ONE terminal window:

Running yarn dev will do all the above except the celery part.

Okay, so if we run yarn dev:celery we should see something like this: 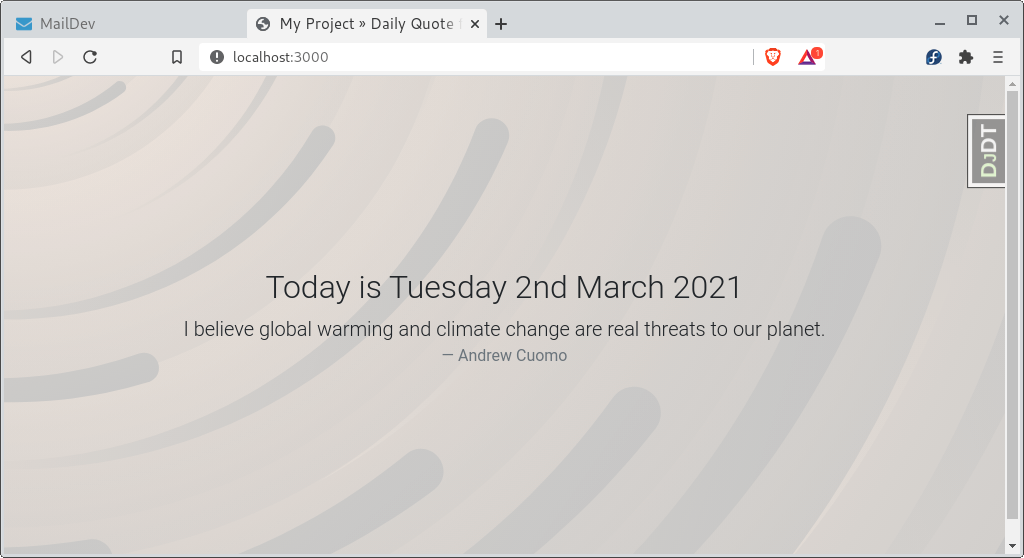 We can run tests via yarn test, and the tests should pass. At the time of publishing this post, test coverage stood at 93%.

Enough with development, time to go into production

Well, at this point, we're ready to deploy our project. With so many deployment options available, the question is, "which option works best for me"? I typically use the "traditional" approach – a GNU/Linux server in "the cloud". This entails

I am exploring other deployment options, and will consider documenting my journey in a future post

I will not cover setting up a GNU/Linux server for deployment in this post. Because setting up servers can be a tedious task, it is better to automate this process, and I found Jason Hee's setup script to be awesome. It automates the setup and provisioning of Ubuntu servers. I forked it to add my own customizations and additional packages.

I mostly use uWSGI as the application server for my Django/flask projects, and systemd to manage not only the uWSGI server but also other services such as redis. It therefore seemed fitting to maintain systemd as the means of daemonizing celery in production. The official celery docs give different ways of daemonizing celery:

While the docs provide good examples to get one started with systemd, I struggled to turn these examples into something that actually worked. I had a situation where celery and celery beat "worked on my machine", but didn't work in production! So, I searched the web, and came across this excellent article on the Will & Skill website. The article gives a practical guide on how to set up Celery in your Django project and daemonize it on Ubuntu (It doesn't cover celery beat though). Even after following the article, I still didn't quite get things right the first time. The problems I encountered had more to do with UNIX permissions and roles, as well as the intricacies of systemd and celery. In my troubleshooting, I found the following resources helpful:

Okay, enough with the talking, show me the code already! Alrighty then, here is my setup ...

As described in the Will & Skill article, (1) create a new user named celery, then (2) create the necessary pid and log folders and set the right permissions. For the latter, I tried the systemd-tmpfiles approach, but it didn't seem to have worked, so I did it manually. I also had to run sudo mkhomedir_helper celery after the useradd command, because I realised that a home directory was not created for the celery user.

Next, we create a file /etc/conf.d/celery-project with the following content (take note of the comments):

We then create /etc/systemd/system/celerybeat-project.service with the following:

With this setup, we can have multiple Django projects, each with its own set of the above three configuration files (of course, they should be aptly named to distinguish between your projects).

Okay, now that everything has been configured, we can fire up celery and celery beat via systemd:

Check to ensure that everything is working correctly:

If you don't encounter any errors, you can then "persist" your services so that they automaticaaly run on boot:

For convenience, I have added these three configuration files in the .envs.example/celery directory on the Github repo.